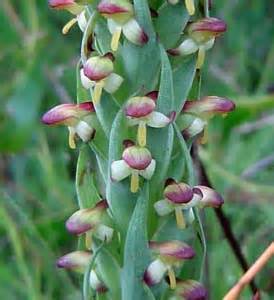 Native to South Africa, the African Weed Orchid is considered as a significant environmental weed in Western Australia, South Australia and Victoria, and has been noted as a potential weed in Tasmania.

Competing with native flora in grasslands, pastures, bushland and disturbed ground, African Orchid Weed displaces desirable species of orchid and grasses and is capable of flourishing in various soil type’s ad light conditions, giving it the potential to spread in a wide variety of areas and climates. Since its introduction to Western Australia in 1944, African Orchid Weed has spread rapidly and has become a concern to farmers and environmentalists alike.

African Orchid Weed is capable of reducing the productivity of pastures should large infestations occur has the potential to impact on rare and endangered plants. It also invades conservation areas and has been identified in the Lower Glenelg National Park in Victoria and Kaiserstuhl Conservation Park in South Australia.

The weed is characterised by a spike producing up to 50 brown, pink and white small flowers on a stem capable of growing up to 75cm high with rosette leaves and a yellow, tongue like labellum. Flowering in spring and self-pollinating, the tiny dust-like seeds are easily dispersed by wind and new plants can emerge year after year due to the perennial tubers. This dense network of underground tubers make it difficult to eradicate African Weed Orchid.

Manual removal of the weed before it sets seed in late November is the preferred method of control. A lot of care is needed if a plant is removed as the flower head matures. Use a trowel to lever up the tubers. Gently bend the stem into a plastic bag, ensuring all seeds are deposited in the bag. Place the plastic bag in the sun to cook for a week, and dispose of it in the correct manner.

Another alternative is to burn the tuber but this is not recommended during dry periods due to a risk of starting a bushfire.

Should you encounter an outbreak of African Weed Orchid, it is best to report your finding to your local environmental or weed management officer who can advise a suitable course of action for the safe removal of the weed.