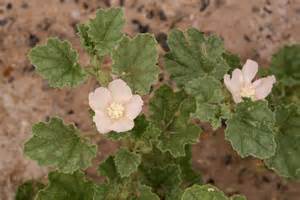 Alkali Sida is an invasive and noxious weed that was intentionally introduced to Australia but has become a threat to irrigated pastures. Its ability to flourish in areas with alkaline and saline soils, Alkali Sida can be found in agricultural lands, including fields and orchards where it competes for space, light and nutrients with desired species of plant.

Such is the threat of Alkali Sida in irrigated pastures that the plant has been banned from sale in Australia and any outbreaks that are identified must be reported to your local weeds official.

A perennial herb. Alkali Sida is characterised by its white-hairy stem which is capable of growing up to 40 centimeters in length and spreads along the ground. The leaves of Alkali Sida vary in shape but are generally lobed and wavy along the edges, measuring 1 to 3 centimeters wide. Leaves appear in the leaf axils singly or in clusters of up to 3. Each flower is a cup-shaped corolla of five petals up to 1.5 centimeters long in shades of white or light yellow and the disc-shaped fruit is divided into several segments.

Evidence suggests that cultivation could spread Alkali Sida through paddocks as root fragments and its seed capsules might be spread in the wool of sheep. Alkali Sida is adapted to grow on alkaline and saline soils, and will survive on the rainfall available across the agricultural zone of South Australia and its deep root system enables it to survive drought.

Alkali Sida can be controlled by repeated spot spraying with an appropriate herbicide. Using a reliable spot sprayer, soak the foliage of the weed and allow the herbicide to run off the leaves. After seven days, check the plant and repeat the spray process if necessary.

This is a cost effective way of dealing with any outbreaks of the weed, however the herbicide used on Alkali Sida should not be applied close to vines or horticultural crops due to potential for vapour drift. In these circumstances, the use of a spray hood should be utilised in order to prevent damage from the herbicide reaching desired species.

For further information on reliable and effective spot spraying equipment suitable for use on Alkali Sida, click here or call 1800 011 000 to speak to a member of the Rapid Spray team.