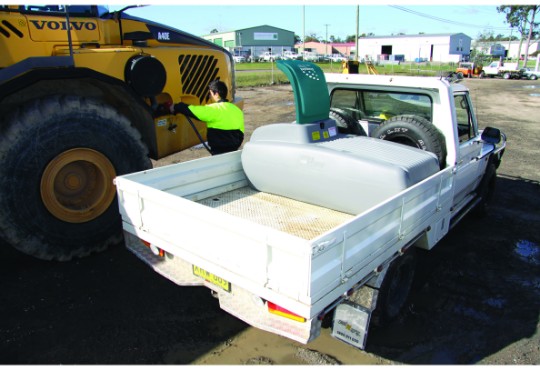 Steel tanks are prone to rust, including tanks that are utilised for the storage and delivery of diesel. This is caused by a build-up of condensation in the tank with moisture ingress partly due to the heating and cooling of the tank during normal operation. The expansion and contraction creates a vacuum inside the tank that draws in more moisture from the outside air, resulting in rust.
The increased temperatures seen in steel tanks causes moisture to condense at the bottom of the tank and sit below the diesel, resulting in further rust. Once this rust begins to flake off into the fuel, any filter present in the steel tank will become blocked, damage the fuel pump and restrict fuel flow. Also, small fragments of rust will potentially find their way into the fuel contaminating it.
Contamination by small fragments of rust in diesel can cause lasting damage to the vehicle engine. The best case scenario will see poor engine performance or in the worst case, internal damage can be caused to the injection system and result in costly repairs.
As poly diesel tanks never rust, this problem is alleviated. Poly tanks maintain a more stable temperature, meaning that little condensation is produced to sit below the diesel. Filters remain clean and diesel pumps are free from rust fragments allowing them to continue to work at full capacity.
For this exact reason, major motor vehicle manufacturers utilise plastic fuel tanks in both petrol and diesel engine vehicles.
Poly diesel tanks also offer the added advantage of being lightweight meaning a greater payload and benefit of being easily transferred from vehicle to vehicle with ease. Impervious to chemicals, fuel remains free from contamination and safe to use for vehicle refueling.
To find out more about poly diesel refueling units, click here to visit the Rapid Spray website.