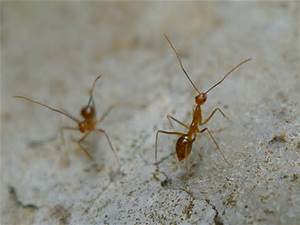 One of the world’s most invasive species, the Yellow Crazy Ant is thought to have originated in South East Asia and be transported to Australia in sea cargo. Aptly named due to their colour and erratic behaviour, the Yellow Crazy Ant has spread throughout Queensland and it is estimated that it has spread to as many as 320 hectares of land around Cairns, Townsville, Hervey Bay, Caboolture and Brisbane.

Yellow Crazy Ants pose a significant threat to biodiversity as they invade forests, offshore islands and plantations where they cause indirect damage to fruit due to their tendency to protect various species of scale insects, decrease the number of native ant species and act as predators of various small insects that are essential to biodiversity.

The impact on producers of fruit in areas known to have outbreaks of the species could be devastating and result in millions of dollars in lost production should the Yellow Crazy Ant invade their crops. The potential for spread of the Yellow Crazy Ant is mainly located along the East Coast of Australia and Northern Territory, although the species can survive in any moist and warm climate.

Government initiatives are currently in place to eradicate infestations of the Yellow Crazy Ant and early signs indicate that treated areas have seen a reduction in the numbers of the species present. Landcare professionals have been urged to be on the lookout for the species to prevent further spread and threat to biodiversity.

Qualified pest contractors can treat Yellow Crazy Ant nests using an ant bait called ‘AntOff’. It is granular bait that consists of a fishmeal-based ant attractant and an insecticide called ‘Fipronil’. Fipronil is a broad-spectrum insecticide that is used in agricultural, residential and veterinary situations. It is used for the control of many domestic and agricultural insect pests including the control of termites, cockroaches and ants in residential and commercial buildings.

Fipronil can be applied using a backpack sprayer, such as the Inter Elite Professional Backpack Sprayer which is ideal for use with insecticide and comes in both 12 and 16 litres sizes. Complete with a wide range of spray accessories, the ergonomic tank and high capacity, super strong pressure chamber delivering up to 100psi spraying pressure makes applying the insecticide quick, easy and comfortable for the operator. Click here to find out more.

However, before treating any area where you believe that Yellow Crazy Ants may be present, it is imperative that you seek further help and guidance from the Wet Tropics Management Authority.