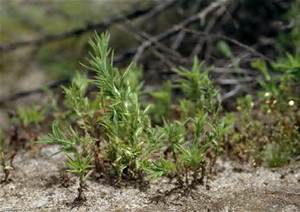 Although only in the early stages of establishment in Australia, Kochia has been named as one of twenty eight species of non-native plants that pose a risk to biodiversity.

Originally introduced in 1990, Kochia has spread rapidly due to its ability to flourish in areas where water is scarce. It has been identified in several arid areas where it has invaded cereal crops and suppressed the growth of nearby plants. Kochia also releases a chemical into the ground that contaminates any plant growing nearby and results in a loss of productivity due to hindered growth and unhealthy plants not fit for consumption.

A summer annual plant, Kochia is capable of growing up to 5 metres in height and has an erect main stem with elongated spike-like branches up to 8mm wide and 50mm long that range in colour from green to burnt orange. The Kochia plant also features flowers of the same colour that grow in pairs. Broken leaves are carried by the wind producing a highly flammable tumbleweed, making the spread of Kochia a fire risk in dry areas where the plant is known to thrive.

Kochia plants produce seeds annually and are spread as the seeds attach themselves to the dead branches and are blown by the wind as tumbleweed. Some seeds also fall close to the parent plant, creating dense thickets and further suppressing other plants in close proximity as they complete for space, light and nutrients in the soil.

In order to prevent further spread of Kochia, it is strongly advised that no new plants are introduced to gardens, parks or other areas and that seeds are not purchased online and planted. Should you identify an infestation, do not attempt to control the outbreak yourself as you could unintentionally spread the weed further afield.

Instead, you must contact your local weeds official or local council and report the location of any plants directly to them who will be able to advise you on a suitable course of action.

By attempting to ‘dig out’ any Kochia plants, some seeds may fall to the ground, be carried by the wind or further afield should the weed not be disposed of in the correct manner.

In the United States, some herbicides have proven to be effective in controlling such infestations but many plants have built up a tolerance to certain types. Therefore, seek guidance from your local weeds official