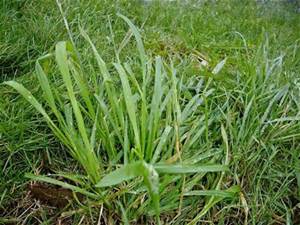 Commonly known as one of the most serious weeds of world agriculture, Couch invades more than 40 types of crops, pastures, vineyards, orchards, and horticulture causing yield reductions. Couch is often found in irrigation channels, stream banks, roadsides, wetlands and river banks and causes clogging restricting the flow of water and harming the biodiversity of areas it infests.

Certain varieties of Couch also cause prussic acid poisoning which only occurs under certain conditions and affects grazing livestock and is most often noted when Crouch is actively growing between December and March after summer rains and is lush and appealing to hungry sheep and cows.

Crouch is a spreading, mat forming perennial grass with green, flat leaves and a 3 to 7 fingered seed head with two rows of spikelets. Preferring fertile soils and warm climates, Couch invades open sites that are subject to ground disturbance due to grazing, fire or flooding and is also a known host of a variety of unwanted pests. Couch is also resistant to drought and fire and once an infestation occurs, can be difficult to control.

When attempting to suppress Couch infestations, several spray treatments are usually required. In order to achieve an effective kill, use Spray Fusilade® Forte at 13 ml/L + wetting agent or for generic fluazifop-p (212g/L active ingredient) 8mL/L + wetting agent when plants are small and beginning new growth, or 1% glyphosate in late spring/summer and autumn when rhizomes are actively growing. In sensitive areas try painting runners or crowns with 50% glyphosate.

As Couch plants can spread over vast distances, the use of a spray unit with a powerful pump, motor and large tanks for herbicide is required. The ElitePro Spray Unit is often utilised to control large spreading infestations due to the quality components and superior reliability in the field twinned with a hardwearing hose reel and spray lance. Click here to find out more.

Follow up treatments are almost always required when suppressing Couch infestations. Check the treated area 10 to 12 days after the initial treatment and reapply the herbicide to prevent any future regrowth. Spraying Couch is often most effective after the plant has been subject to fire as the plant is stressed and weak.

For further information on the best spray equipment when tackling Couch infestations, call 1800 011 000 to speak to a member of the Rapid Spray team.